GUMDO is a Sword Art.

It requires a high degree of concentration and precision rarely found in modern arts and sports. It is an excellent discipline for most age groups as well as for families!

Three types of swords are used prior to black belt. These are the wooden, bamboo and blunt-alloy (imitation) swords. Only after the Black Belt has been achieved does a student start using the real sword. Three types of swords are used prior to black belt. These are the wooden, bamboo and blunt-alloy (imitation) swords.
Only after the Black Belt has been achieved does a student start using the real sword.

This may be disappointing news to eager students but it is for their safety as well as the well being of other students. Only through continued focused practice and the pursuit of precise excellence is a student ready, confident and skilled to wield the Jin Gum (Real Sword). In 1954-55 Master Park began his sword training in the only location that had the necessary space and equipment for training. This was “Mapo-Ku” (the town jail) located in “Gong Duk-Dong” (the towns name) in Seoul Korea under Master Young Dal Kim. The style was Daehan Gumdo, presently known as the Korean Gumdo Association
http://www.ushaidong.org/.
Today this organization is predominately concerned with sport competition and
is not in alignment with Park’s Martial Arts precepts of martial arts as
the “Do” (the Way)”.

Master Park implemented both his original Gumdo methods in
conjunction with our predominate and  current style of Haidong Gumdo at our Salisbury Headquarters school in 1991 after meeting and appointing a Haidong Gumdo Instructor named Sim, Taek Sun to teach classes.  Instructor Sim was a recent immigrant to the US from Korea. On his first tour in the USA in the late 1990’s Haidong Gumdo President Kim, Jeong Ho
(pictured above standing next to GM Park) officially noted Park’s Martial Arts as the first Haidong Gumdo school in America since it was  established 1991.www.hdgd.org 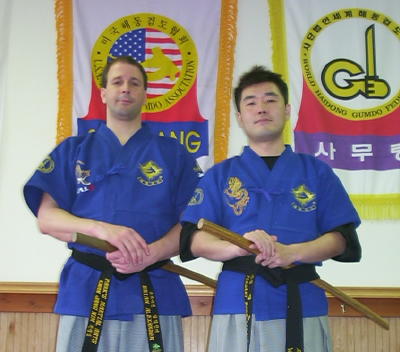 Haidong Gumdo, The Way of the Sword, is an ancient and noble martial art from Korea . It’s purpose is to execute justice with the light of the sword, that is as majestic and brilliant as the morning sunlight on the east sea. Geographically, Korea is in a great location. It’s a peninsular nation with ample access to the ocean, as well as being a close neighbor to both China and Japan . Because of its location, nearby countries in ancient times often sought to occupy Korea to gain control of its excellent geographical attributes. Korea also frequently struggled with civil war, as opposing dynasties within the country vied with each other for power. As a result, Korean warriors of old often found themselves fighting off foreign invaders and warriors from rival Korean dynasties.

The prevalent state of warfare in Korea gave these Korean warriors the opportunity to practice their sword techniques and find out which techniques neutralized their enemies most efficiently and effectively.  One group of warriors–Samurang–who lived in the Koguryo kingdom nearly 2,000 years ago, became particularly skilled at swordsmanship.  Their training hall was located on Mt. Baekdu (which rests on the North Korea-China border) and they were led by a master swordsman named Sul Bong, who had great spirituality.  Sul Bong not only taught his students the deadliest sword techniques, but also told them to live their lives according to the ideals of Choong (loyalty), Hyo (filial piety), Ye (propriety), Eui (justice), Shin (trust), Ji (knowledge), Duk (generosity) and Che (sound body).

The Samurang spread the vision of living each day with righteousness and justice, and under the command of General Uel Ji Moon Duk, fended off 2 million soldiers during the invasion of the Sui Dynasty.  They also defeated 600,000 Tang soldiers at the Ahn Shi battle under the command of General Yang Man Choon.  Through the centuries, the sword techniques that the Samurang perfected were passed down from warrior to warrior until, in the 1970’s, they reached a spiritual wanderer named Jang Baek-San.  Jan Baek-San, living on Kwanak Mountain , found an eager and talented student in Mr. Jeong-Ho Kim.  He taught Mr. Kim all he knew of Haidong Gumdo, and Mr. Kim has moved on to modernize Haidong Gumdo and establish a worldwide Haidong Gumdo presence.

Today, Grandmaster Jeong-Ho Kim is the President of
The World Haidong Gumdo Federation
, an organization dedicated to spreading the art of Haidong Gumdo throughout the world.  Grandmaster Kim has established nearly 500 Haidong Gumdo dojangs in Korea and well over 1,000 schools in 30+ other countries outside of Korea .  He continues to spread his vision of the martial arts and conduct seminars; and has received numerous awards, including one given by Bill Clinton, President of the United States , for his great contribution to American society.